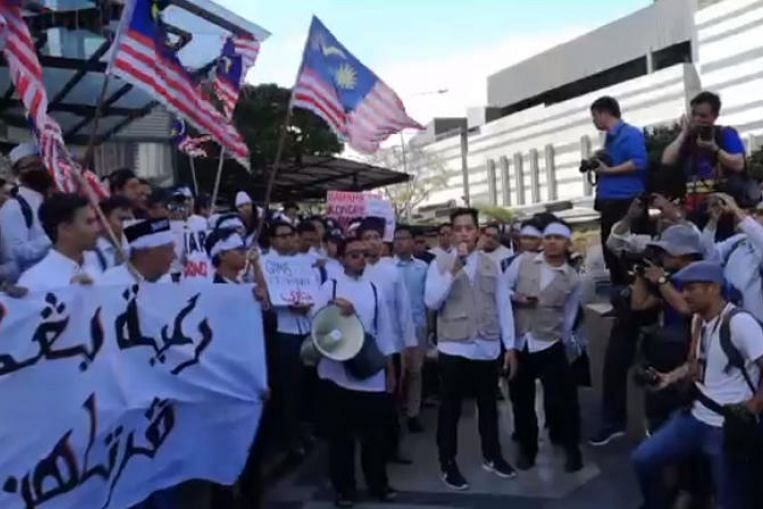 KUALA LUMPUR – Some 300 Muslim students gathered on Wednesday (January 1) to protest against the Chinese educational group Dong Zong for opposing the Malaysian government’s plan to introduce Jawi writing to Chinese and Tamil schools.

The peaceful rally, organized by the Malaysian Muslim Students Coalition (Gamis), was held despite a police warning on Tuesday December 31st that the organizer had not obtained permission from Kuala Lumpur City Hall and the police for walking.

Police did not intervene in the protest outside a popular shopping mall in downtown Kuala Lumur. Students held up placards and banners while listening to speeches from several speakers.

Previously, some 150 students gathered at the historic Masjid Jamek Mosque in Kuala Lumpur and planned to walk to the nearby mall. But Gamis chairman Saifullah Baiduri advised them not to do so, MalayMail online news reported, because holding a march without a proper permit is prohibited by local law.

There are over 1,200 Chinese and 523 Tamil primary schools in Malaysia that use Mandarin or Tamil as the language of instruction.

In August, the ministry surprised most people by saying it would include Jawi’s writing in Bahasa Melayu’s Year 4 (Primary 4) curriculum in vernacular schools, raising concerns about Islamization. creeping.

These vernacular schools are run independently from the national schools, and where students, mostly Malaysians, learn Jawi writing as part of Islamic studies.

Police obtained a court order to stop the congress planned by Chinese education groups, but allowed a national Jawi congress to be held on Sunday.

Organizers of Sunday’s congress, which included prominent political activists, urged the government to suspend teaching a module of Jawi calligraphy in vernacular schools.