10 Chinese Concept Cars That Could Be A Game Changer 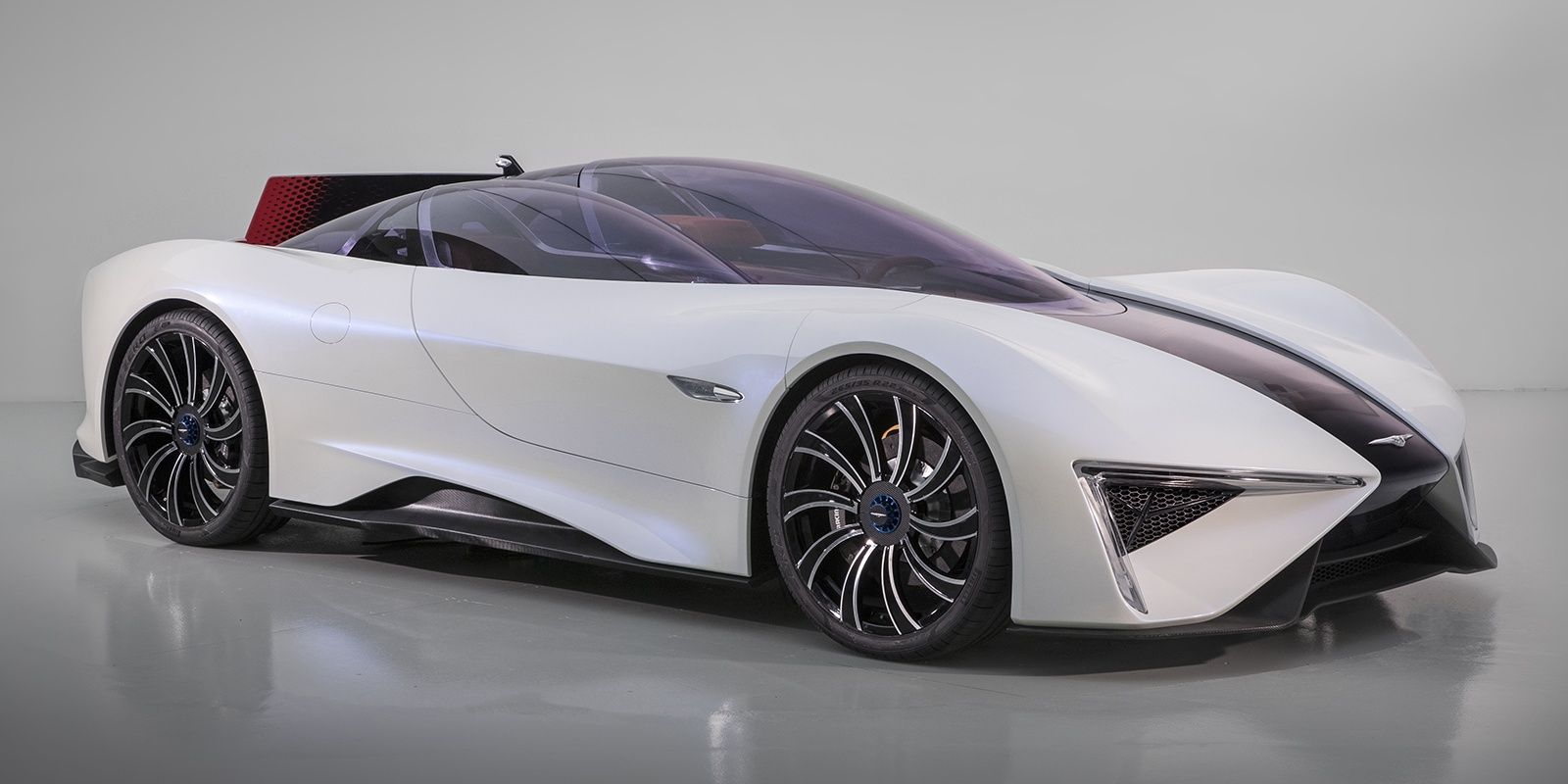 10 Chinese Concept Cars That Could Be A Game Changer

A few decades ago, the Chinese auto industry might have been mostly a collection of counterfeits and econoboxes, but things have changed a lot since then. As demand for cars has grown in China, the fortunes of automakers in the country have grown, and as a result, many of them are strapped for development cash and ready to find the next big innovation. For some companies, these innovations come in the form of new technologies or exceptional performance, and for others, it is an expansion from the domestic Chinese market to the global stage.

To realize all these lofty ambitions, automakers launch dozens of concept cars every year, showcasing their latest and greatest ideas. Needless to say, many of these concepts will never make it to production, being consigned to the archives just like their European and American counterparts. But, those that do are filled with innovations that could spill over to the rest of the global auto industry, in some cases catapulting their manufacturers from being known only in China to being recognized around the world. Let’s take a look at ten Chinese concept cars that, if they make it to production, could be a game-changer.

The Qoros Milestone is certainly one of the most unique Chinese concepts of recent years, with a square headlight and taillight design as angular as a Tesla Cybertruck. But it’s the technology inside the car that could really change that.

The car’s doors can apparently be opened with hand gestures, and the lack of B-pillars is meant to make getting in and out of the car easier than a conventionally designed vehicle. The windshield can also transform into a giant screen when the vehicle is in self-driving mode, transforming the car into a kind of mobile cinema.

Lynk & Co is a sub-brand of Chinese conglomerate Geely, which also owns Lotus and Volvo among a number of other brands. The 03+ Cyan is a performance concept that debuted in 2019, with a 528hp powertrain derived from the brand’s World Touring Car Cup race car.

Lynk & Co is primarily focused on the Chinese domestic market, but a sister brand, Zeekr, has already been created by Geely with the intention of selling cars internationally. The production Zeekr 01 debuted in 2021 very similar in styling to the 03+, so hopefully we’ll see a performance Cyan-based version of the Zeekr soon.

Perhaps the most unlikely of all the concepts on this list is the XPeng flying car, unveiled by automaker associates HT Aero and slated for production in 2024. According to a CNBC report, the car is expected to feature two rotors that will fold up inside the car to make it usable on the roads as well as in the sky.

The idea of ​​a flying car has been touted many times, and no manufacturer has ever managed to make one, so it seems highly unlikely that XPeng could make it work. The only glimmer of hope is that the company already has a working electric flying vehicle, which has reportedly undergone test flights in China and Europe. However, it’s probably not a good idea to start saving for a flying car right away, even though XPeng is confident they’ll have one ready in just a few years.

Curiously, this Chinese sports sedan concept is named after a boss from the Mega Man 2 video game, but that’s not the only thing that’s a bit different. It’s meant to be a challenger to the wave of performance electric vehicles that have debuted recently, matching their performance but reducing their price.

It comes with an output of 543 hp, which puts it about on par with a base Porsche Taycan, but it costs around $70,000, which undercuts the Taycan by around $15,000. It might be better value for money, but the Mecha Dragon might struggle to convince customers outside of China, especially since one outlet compared its exterior design to that of a Grand Theft Auto car.

The idea of ​​a turbine-powered car is not new, as British car manufacturer Rover was experimenting with the idea as early as the 1940s. But, the system never made its way into a production car, that is. that is, until Chinese startup Techrules unveiled the Ren.

So far, the car has only been shown in concept form, but the company says production is expected to start imminently. The car can be optionally fitted with hybrid or all-electric powertrains ranging from 429 hp to 1,287 hp in premium form.

There’s been a lot of hype around fully autonomous vehicles, but so far no automaker has managed to fully transfer the technology to a production vehicle. Sure, there are plenty of semi-autonomous cars out there, but so far even Tesla hasn’t been able to build a car that doesn’t require human intervention.

Hongqi’s E-Jing GT concept was a step towards change, as he claimed the company would partner with tech giant Baidu to create a fully self-driving car based on the concept within the next few years. Of all the automakers making such bold claims, Hongqi is well placed to back them up, as they already manufacture over 300,000 cars a year and have seen sales increase by 52% between 2020 and 2021. This puts them on the edge. heels. of Tesla, and in a good position to compete for the lead in the race for autonomy.

This rather mundane concept is actually a milestone in the history of EV NIO startup, as it’s the first time they’ve showcased a car with a claimed range of 1,000 km (621 miles). NIO already has a strong market share in China and the ET7 is believed to be nearly production ready, so it should make its domestic debut soon.

RELATED: The New Tesla? Here’s what you need to know about NIO

But, perhaps the most interesting news that accompanies the unveiling of the ET7 is that NIO was planning to expand its presence in Europe in a few years. Chinese brands have always struggled to gain a foothold in other major markets like the US and Europe, but with NIO already selling cars in Norway and aiming to soon introduce its own branded charging stations in from other European countries, it looks like Tesla could have strong competition in the next few years.

An all-new startup with an all-new hypercar, the Farnova Othello debuted in 2021 with a typically bold set of performance claims. It is said to produce 1,810hp and come with a battery array sourced from Swedish manufacturer Northvolt.

At least one actual concept car has been made, although it’s unclear if it uses the same powertrain as the production car. If Farnova can get the car into production, they’ll be one of the only EV startups to successfully bring such a powerful car to market on their first try.

Most production electric vehicles have thus far been larger, more luxurious offerings, as manufacturers scramble to earn profit margins high enough to recoup the exorbitant development cost of switching to electric power. The ORA Cat GT is the opposite, being a sporty small sedan that is expected to enter select overseas markets later in 2022.

The ORA brand is a subsidiary of Great Wall Motors, a Chinese conglomerate that already has a limited presence in markets like the UK and Europe. But, with its quirky looks and range of up to 260 miles, the Cat could take the company from a niche brand to a major player in the European market if it succeeds as ORA hopes.

MG may have epitomized the essence of the British performance car, but since the Rover Group went bankrupt in the early 2000s, the brand has been owned by Chinese automaker SAIC. MG currently sells a range of affordable electric vehicles and combustion engine passenger cars in the UK and China, but the E-Motion signals a return to the brand’s performance roots.

Or at least it is supposed to, as the E-Motion would be a preview of an upcoming performance car that MG is expected to debut in the next few years. This car has so far not been confirmed for production, but if it does it will mark a return to form for MG after years of being treated as merely a marketing tool for a range of economy cars without interest.

Mark covers a variety of topics for HotCars, from the latest pickup trucks to obscure Japanese sedans. A regular at car shows in the UK and Europe, if there’s a strange model or an obscure manufacturer, he probably knows it. Having previously worked as a radio presenter, he knows a thing or two about Top 10 lists and enjoys writing them as much as presenting them. Mark graduated from the Department of English at the University of Sheffield and is currently based in Birmingham, UK.