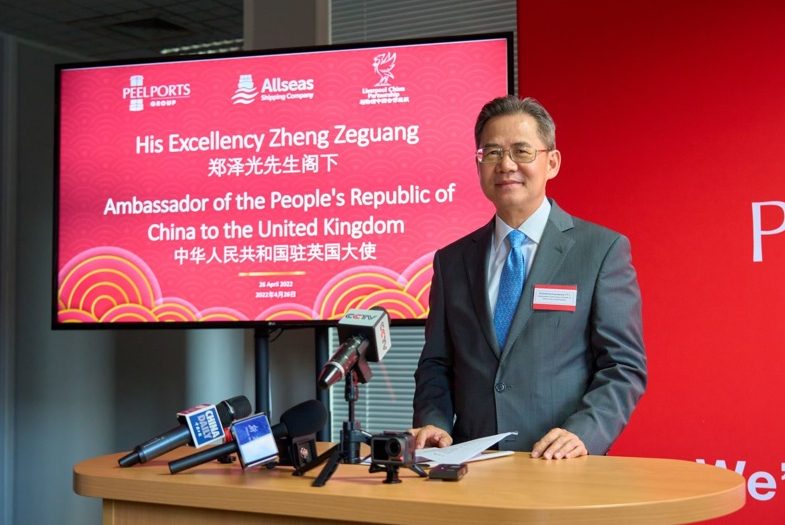 The Chinese Ambassador to the UK visited the Port of Liverpool to mark the success of the China Xpress shipping service, which is the first direct sea route from the Far East to Liverpool.

Ambassador Zheng Zeguang was marking the first anniversary of the route which was launched by London-based shipping company, DKT Allseas, in May 2021, to address the supply chain disruption caused by the global pandemic and to allow the delivery of goods to UK importers from their suppliers in China.

The 30-day service, which carries up to 1,700 containers from the Chinese ports of Ningbo and Shenzhen directly to the Port of Liverpool, is now set to expand with a feeder service link to the ports of Qingdao, Shanghai, Foshan and Nansha.

In addition, Allseas Global is also expected to host the inaugural call of the new Allseas Pioneer vessel in Liverpool this month.

Darren Wright, Managing Director of Allseas Global, said: “The Allseas Pioneer is the first in a series of six own-brand container ships, with an investment of over $150 million, such is the commitment we have to this service and customers using it to stabilize their supply chains. We are truly honored by the visit of the Ambassador and Consul General to help celebrate and promote this unique and pioneering service directly from China to Liverpool.

On his first visit outside London since the start of the pandemic, the ambassador was accompanied by Zheng Xiyuan, Chinese consul general in Manchester and other senior embassy officials.

The Ambassador was also joined by the Mayor of Sefton, Cllr Clare Louise Carragher and representatives from the Liverpool China Partnership, the Department for International Trade as well as local Chinese business representatives to mark the special occasion.

The Port of Liverpool has been instrumental in enabling the Allseas Global China service to bypass the most congested ports in the south of the UK and provide a closer entry point for the final destination of goods.

The port is owned by Peel Ports Group, one of the UK’s largest port operators. The group has invested over £400m in Liverpool2, a deep-sea terminal which was launched in 2016 and has since provided multiple global business opportunities for global importers and exporters and shipping lines such as AllSeas.

Claudio Veritiero, Managing Director of Peel Ports Group, said: “We were honored to welcome Ambassador Zheng Zeguang and senior officials to the Port of Liverpool to mark the commemorative occasion. China is a key trading partner for the UK and our ports play a vital role in the future growth and development of this market.

“The investments we have made in Liverpool2 have supported a doubling in the value of trade between China and the Port of Liverpool, exceeding £1bn for the first time in 2021.

“With the continuing uncertainties surrounding the global supply chain, we are confident that with the right partnerships and the right trade, the Port of Liverpool will continue to drive a prosperous future for the benefit of many.”