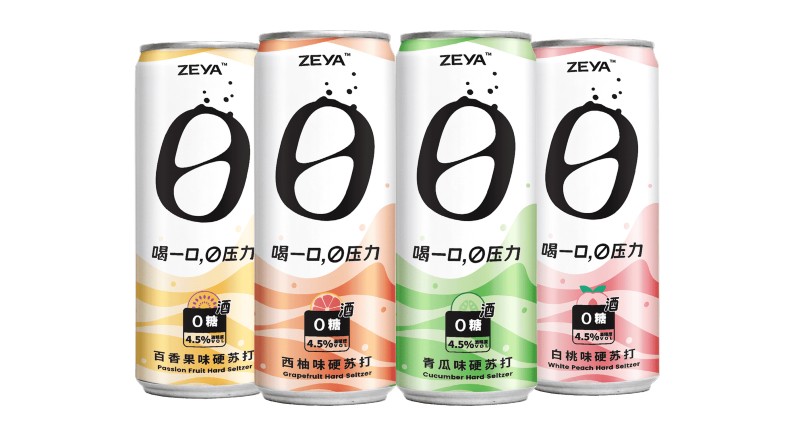 ZEYA’s business model is based on the creation of a zero-pressure RTD alcoholic beverage (ZE – zero; YA – pressure in Mandarin) primarily aimed at a younger audience, seeking to break away from the traditional drinking culture in China, well known for being stressful and stressful, especially in the workplace.

“These days younger consumers are actually looking to move away from that, they don’t want to do that anymore and are instead looking for options that are more in the ‘best for you’ category, that are lower calorie, lower ABV, lower of sugar – and most importantly can promote a less stressful approach to drinking and making the occasion something more laid back and fun, which would resonate with them the most.​

“There was definitely a gap in the market for RTDs like this, for flavored alcoholic beverages (FABs) and for more moderate beverages – and we saw a major opportunity here.”​

The pressured consumer environment is not unique to China – indeed, in several other East Asian markets such as Japan and South Korea, high levels of soju or sake consumption at corporate meetings are seen as the norm for relationship building, and those who withdraw tend to face more distant relationships or even be ostracized.

“It’s really quite common in Asia, but what’s also increasing now is a global trend in terms of moderation and more and more people wanting to cut back, so it’s a good thing, people who want cut back on anything deemed unhealthy, from calories to sugars to alcohol.” “,Hoang added.

“Having said that, it doesn’t mean they want to stop completely – and that’s a really big trend, for consumers to look for healthier options while still allowing them to soak up, and that’s really where we are situated.”​

ZEYA is known for its 4.5% ABV sugar-free range in cans and glass bottles, and is already present in several major Chinese cities via online and offline platforms – but is now ready to go further, after closing its seed round of funding led by renowned luxury cognac brand Camus Cognac.

“Camus Cognac is one of the oldest independent cognac houses to hail from France, and these types of companies have the stereotype of being old and traditional in their approach to business – so it was really interesting to see their engagement with we “Hoang said.

“Camus has a very large share of their business in China and long relationships here, and as a high-end luxury brand they are also looking to gain entry-level market share, particularly to attract an audience. younger who are a bit less elastic when it comes to prices and how much they are willing to spend on alcohol, because with cognac alone they are losing share to some of these younger consumers.​

“For us, we see ZEYA as a global brand and not just a Chinese one, and our partnership with Camus means that we can not only look to elevate our brand, but also leverage their distribution to reach more overseas markets – some of our main targets include Southeast Asia starting with Singapore then Vietnam and Indonesia, then the rest of Asia and potentially even the United States.​

Asked about the specific amount of funding received, Hoang remained coy about the actual numbers, but told Us that a “modest” amount had been raised which would be focused on ramping up distribution and production.

“We aim to be very focused on how we use this first round of funding, and in an FMCG category like this, we know that distribution is really the most important thing at this stage to grow – so to the first stage, we will work on the construction of our roads to the main provinces of China where we have validated the market demand for ZEYA, such as Guangdong, Shenzhen and Hainan; as well as growing sales and working with distributors to get products to more places.​

In China, it is generally more common for FMCG brands to produce on an OEM basis as the cost is lower, but ZEYA has chosen to take the different approach of self-production in its own brewery.

“We also do a number of unique things, so having our own brewery makes that easier – for example, we blend our own blend of sugar-free sweeteners with a blend of erythritol and stevia, so it’s mouthfeel and taste. natural to very close to sugar, but it gives zero sugar. ​

“Another thing is we’re a vodka-based seltzer so we don’t use any malt fermentation – most seltzers out west like White Claw are malt-based drinks because it’s cheaper and they can avoid tax, but in terms of quality it’s inferior to using a high quality vodka, so in that sense we can also provide a higher quality product.​