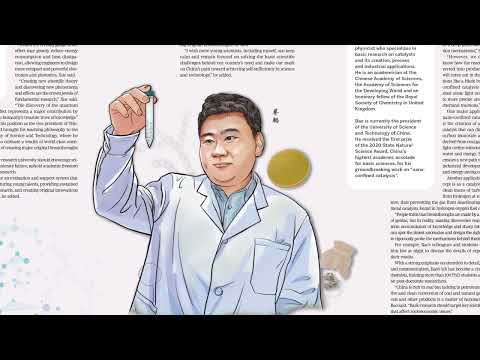 pale gangpresident of the China Association for Science and Technology, called on the Chinese scientific community to unite scientists from all over the world and put scientific exchanges and technological cooperation at the forefront, so as to work according to the principle of building a community and a shared future for humanity.

This will require Chinese scientists to be more collaborative and uphold the principles of open science without borders to facilitate new innovations and solutions to common problems facing all of humanity, Wan said in a post.

At present, the global situation has been fundamentally shaken by special issues, including the COVID-19 pandemic. The new phase of scientific and technological revolution and industrial reform is unfolding. Right now, there is an urgent demand for collaboration among the global community engaged in scientific research, Wan said.

A senior Chinese official once said that innovation is the decisive factor in promoting economic and social development and addressing common challenges of mankind. Such global cooperation can stimulate openness to a higher level and provide systematic solutions to the common concerns of people around the world.

Now, China has established cooperative relations in scientific research with more than 160 countries and regions. It is a member of more than 200 international organizations and multilateral frameworks. It has signed up to 115 intergovernmental scientific and technological cooperation agreements.

The China Association for Science and Technology and its regional offices across China have joined 372 international science and technology organizations. She has her sights firmly set on major projects such as the International Thermonuclear Experimental Reactor based in France and paved the way for greater cooperation in epidemic prevention and control amid the grim backdrop of COVID-19.

Some major projects, such as the Five Hundred Meter Aperture Spherical Telescope – the world’s largest single-dish radio telescope – and the Shanghai Synchrotron Radiation Facility project, have been commissioned and opened to visitors from all over the world.

Since the outbreak of COVID-19, Chinese science and technology workers have actively promoted a shared system to provide anti-epidemic knowledge and information.

They quickly isolated and identified virus strains and shared the full genome sequence with the World Health Organization. They carried out frequent exchanges of information on scientific journals and initiated close cooperation in virus tracing, clinical diagnosis and treatment, vaccination experiments and screening of infected people.

These efforts have provided basic information for scientists around the world in their relevant research and helped some developing countries and vulnerable groups to obtain vaccines and medicines at lower cost.

Since the Chinese government announced that it will peak carbon dioxide emissions before 2030 and achieve carbon neutrality before 2060, China has taken many paths and made substantial efforts to pursue the goals.

Nuclear power projects, such as Hualong One technology — China third-generation reactor developed at the national level – are also a crucial step in this effort.

Among them, the cumulative installed capacity of hydroelectric, wind and photovoltaic power generation ranked first in the world, providing strong support for the use of clean and low-carbon energy.

International collaboration on science and technology is also an important component of the Belt and Road Initiative, which takes cultural exchanges and people-to-people relations around the world as the main topic, Wan said.

Within the framework of the BRI, China adhered to the principles of peace and cooperation, openness and inclusiveness, to seek mutual benefits and win-win results. In full respect of the development objectives of the countries and regions of the BRI, China carried out scientific and cultural exchange projects, built jointly managed laboratories, set up science and technology industrial parks, and guided better commercialization of research results, Wan said.

Under the principle of building a community of destiny for humanity, China adheres to the global vision and strengthens its confidence in innovation. It has worked hand in hand with BRI countries and regions in scientific and cultural cooperation, education, public health, digital economy, green development and other fields, Mr. Wan said.

“In addition, the Chinese scientific community should participate deeply in global governance, provide valuable Chinese information, and help shape the concept of science and technology for the greater good. In this way, science and technology can better promote human well-being and make a greater contribution under the principle of building a community of shared destiny for mankind.”

Entering a new phase of development, China is more determined to deepen global openness and cooperation in science and technology and uphold the spirit of open science without borders, barriers and discrimination, Wan added.