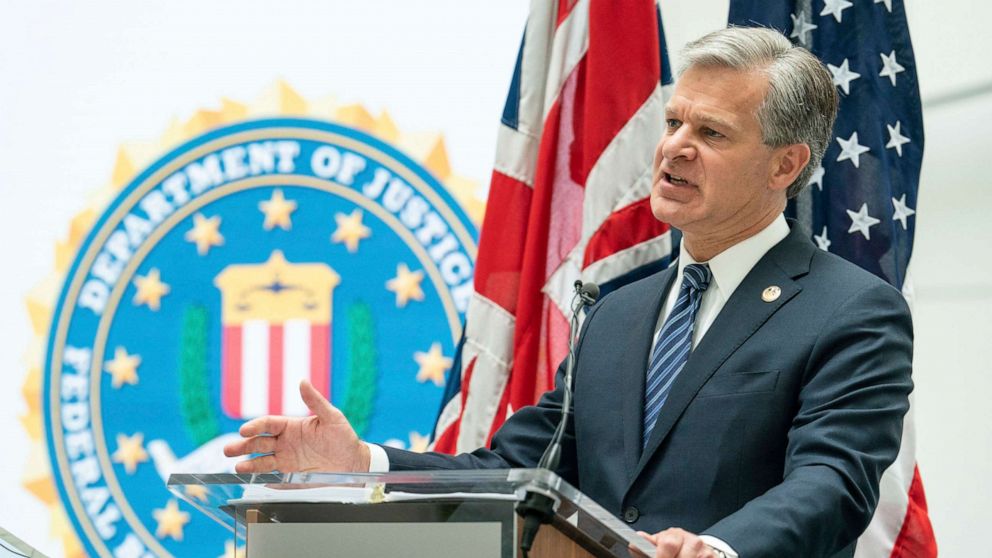 Speaking alongside his British counterpart in London on Wednesday, FBI Director Christopher Wray called China “the greatest long-term threat” to the United States and the United Kingdom.

“The Chinese government is determined to steal your technology – whatever makes your industry work – and use it to undermine your business and dominate your market,” Wray said during an address to international business leaders. . “And they are determined to use all the tools at their disposal to do so.”

“We even caught people affiliated with Chinese companies in the heartland of the United States, sneaking into fields to dig up proprietary genetically modified seeds, which would have cost them almost a decade and billions of research to develop. “Wray said. “And those efforts pale in comparison to their resource-heavy hacking program which is bigger than that of all the other major countries combined.”

The Chinese, Wray said, use cyber to “steal” volumes of information. He said US officials were working with MI5, Britain’s intelligence service, to identify other investments the Chinese government is making in proxy relationships – a sort of third party venue through which China steals information.

Wray said U.S. companies should be wary of doing business with or in China, something he’s warned about before, and he urged business leaders to contact the FBI for more information on ways to mitigate. the Chinese cyber threat.

His warning was the latest episode of the United States pushing back on what it describes as Chinese hostility. US-China relations have evolved since President Joe Biden took office – his predecessor Donald Trump embarked on a trade war with the country – and the US and China remain deeply bonded , although they are often opposed on various issues.

After a call between Biden and Chinese President Xi Jinping earlier this year, the Chinese Foreign Ministry said, “The US-China relationship has not yet emerged from the difficult situation created by the previous US administration, but has instead encountered more and more challenges. The US side has misinterpreted and misjudged China’s strategic intentions.”

On Wednesday, Wray warned that if China were to invade Taiwan, American businesses could see a repeat, on a much larger scale, of the economic disarray of Russia’s invasion of Ukraine and the resulting international condemnation.

“Just like in Russia, Western investments built over years could become hostage capital stranded, supply chains and relationships disrupted,” he said. “Companies are caught between the sanctions and the Chinese law prohibiting compliance with them. It’s not just geopolitics. It’s business forecasting.”

Wray concluded by saying that the United States and the United Kingdom were working together to combat this threat.

His remarks come as US law enforcement and the Treasury Department have warned the public about another foreign adversary, this one targeting hospital systems.

North Korean-backed cyber actors are targeting the healthcare and public health sector, the Cybersecurity and Infrastructure Security Agency (CISA), the FBI and the Treasury Department said on Wednesday.

These actors are using Maui ransomware, a specific technology that has a North Korean characteristic, to infiltrate healthcare sectors and demand ransom from their systems in exchange for payment, US officials said in a notice.

Officials said that since May 2021, agencies have observed and responded to “multiple” incidents of Maui ransomware indicating they originated in North Korea.

“North Korean state-sponsored cyber actors used Maui ransomware in these incidents to encrypt servers responsible for healthcare services, including electronic health record services, diagnostic services, imaging and intranet services,” the notice reads. “In some cases, these incidents have disrupted services provided by targeted organizations in the HPH sector for extended periods of time.”

The agencies believe that because healthcare organizations “provide services essential to human life and health”, they are liable to pay ransoms in the event of an attack. Law enforcement advises against paying the ransom and contacting CISA or the FBI instead.

“Because of this assumption, the FBI, CISA, and Treasury believe that North Korean state-sponsored actors will likely continue to target organizations in the HPH sector,” the officials said.