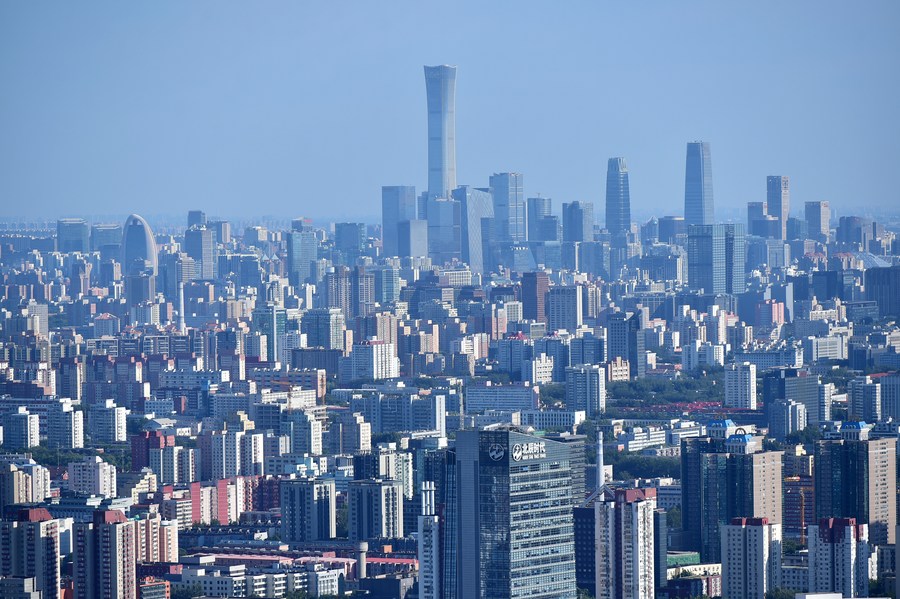 Photo taken on Sept. 9, 2020 shows the view of skyscrapers in the central business district (CBD) in Beijing, capital of China. (Xinhua/Chen Zhonghao)

BEIJING, May 26 (Xinhua) — China faces difficult challenges in promoting reform, development and stability, as drastic changes and a pandemic not seen in a century transform the international scene and plunge the world into a new cycle of turbulence and change.

In this context, Xi Jinping, general secretary of the Communist Party of China (CPC) Central Committee, stressed both high-quality development and high-level security as part of the country’s efforts to embrace a brighter future for China. Chinese economy.

The enormous “black swan” of the COVID-19 pandemic has become the biggest variable affecting the recovery of the global economy. The virus continues to ravage the world and mutate, having resulted in some 520 million confirmed cases worldwide and more than 6 million related deaths.

Since March this year, outbreaks of COVID-19 have hit parts of China, significantly affecting the country’s economic recovery.

Xi stressed the importance of effectively coordinating COVID-19 prevention and control with economic and social development, maximally protecting people’s health and safety, and minimizing the impacts of the pandemic on economic development. and social.

For example, earlier this year, the southern city of Shenzhen, a tech hub and major center for foreign trade in China, saw a resurgence in COVID-19 infections. The city took a series of measures, such as the suspension of public transport and the closure of certain businesses, from March 14 to 20, and managed to bring the situation under control.

Shanghai has halted community transmission of COVID-19 in all of its 16 districts as of May 17.

Besides fighting the resurgence of the virus, China has enacted a series of policies to stabilize the economy and safeguard development security, involving efforts to maintain smooth logistics and stable industrial and supply chains.

The country has carried out new support policies combined with tax and duty reductions. Tax refunds and reductions are expected to total about 2.5 trillion yuan (about $375.38 billion) in 2022.

Changes in the domestic and international economic environment have exerted enormous pressure, but the fundamentals of the Chinese economy, characterized by strong resilience, enormous potential and long-term sustainability, remain unchanged. “We have every confidence in the future of the Chinese economy,” Xi said during the virtual session of the 2022 World Economic Forum held in January.

Facing complicated situations at home and abroad, China has taken initiatives to ensure that key areas are safe and controllable to safeguard the essentials of high-quality development.

“For a big country like China, ensuring the supply of raw materials is a major strategic issue. We need to strengthen strategic planning and make early adjustments to ensure supply security,” Xi said at the meeting. of the central conference on economic work in December 2021.

A series of measures have been taken to ensure that cereal production exceeds 650 million tonnes this year. Currently, the winter wheat planting area remains stable at 330 million mu (22 million hectares), laying a solid foundation for a bumper summer harvest.

Since energy is the fundamental foundation of economic and social development, Xi stressed the need to safeguard the country’s energy supply.

To ensure energy security, China will add another 300 million tons of coal generation capacity this year. Oil and gas exploration will be strengthened and the construction of large wind and photovoltaic bases will be accelerated. In addition, coal imports will be exempt from tax between May 1 this year and March 31, 2023.

China is also striving to strengthen scientific and technological innovation and promote technological self-sufficiency. The C919 large passenger aircraft developed in China is a good example.

“We have to have our own big jets,” Xi said during a visit to the Commercial Aircraft Corporation of China eight years ago.

The researchers intensified their efforts to overcome the technical difficulties. The first C919 aircraft to be delivered completed a successful first test flight on May 14.

MODERN INFRASTRUCTURE AS A FOUNDATION

Chairing the 11th meeting of the Central Committee for Financial and Economic Affairs held on April 26, Xi, also head of the committee, called for all efforts to boost infrastructure construction as part of the country’s efforts. to build a modern infrastructure system.

On April 29, a meeting of the Political Bureau of the CPC Central Committee, chaired by Xi, reiterated the need to comprehensively strengthen infrastructure construction.

From central to local authorities, a multitude of arrangements have been unveiled and a plan for building a modern infrastructure system has been rolled out step by step.

Efforts have been made to advance infrastructure construction with a focus on consolidating weak links, with the construction of 102 major projects for the 14th Five-Year Plan period (2021-2025) being accelerated. 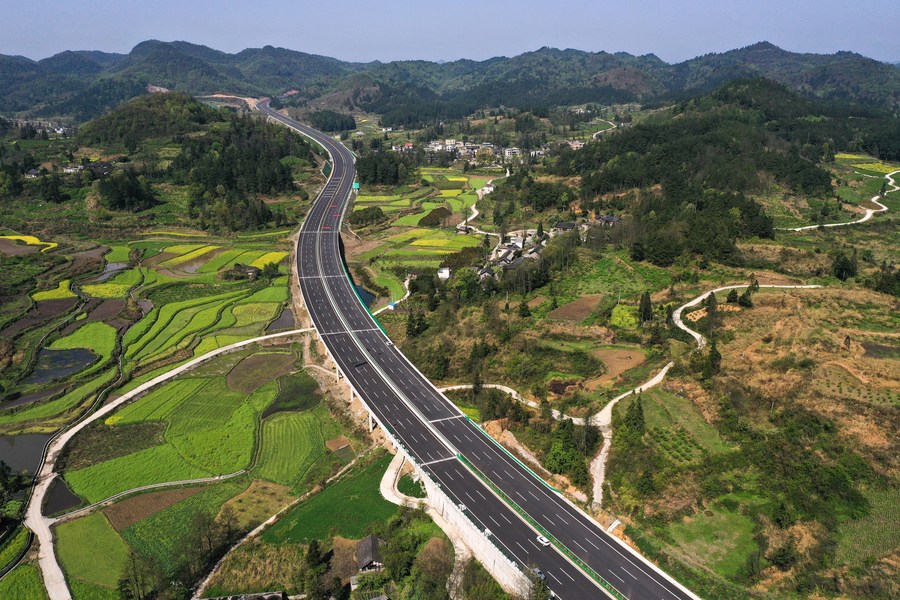 Of the 800 billion yuan in investment for water conservancy projects this year, 195.8 billion yuan was invested from January to April, up 45.5 percent year on year.

At the same time, the country is also striving to build technological and digital infrastructure as part of its long-term goal of optimizing the overall economic structure and fostering new engines of growth.

As part of the digital information infrastructure, the number of 5G base stations in the country increased by around 134,000 in the first quarter of the year, bringing the total to nearly 1.56 million. Earlier this year, China launched work on a megaproject to establish eight national computing hubs and 10 national data center clusters with the aim of improving overall computing power and resource efficiency.

The measures taken by the country to comprehensively strengthen infrastructure construction and build a modern infrastructure system, taking into account both current needs and long-term goals, will lay a solid foundation for future development and will provide opportunities for technological innovation.

The strategy recently received a vital boost as authorities detailed a plan on how to build a unified national market to enable a more efficient and smoother flow of labor and goods across the country.

The move is key to the country’s new development paradigm, “dual circulation,” launched in 2020 as a strategic solution that takes the domestic market as its mainstay while letting domestic and foreign markets boost each other.

“Accelerating the construction of a new development paradigm means enhancing our survivability, competitiveness, development and sustainability in the face of various predictable and unforeseen storms and turbulent waves, to ensure that the process of great rejuvenation of the Chinese nation will not be delayed or even interrupted,” Xi noted.

Meanwhile, focusing on the domestic market does not mean neglecting the larger global market. As the “dual circulation” is by no means a closed inner loop, Xi explained how China’s unlocked market potential, wider opening up and deepening of international cooperation under the new paradigm of development will provide more development opportunities and bring shared prosperity to the world.

To fulfill its commitment, China has advanced the construction of 21 pilot free trade zones and signed “Belt and Road” cooperation documents with 149 countries and 32 international organizations.

IN SEARCH OF NEW SUCCESSES

Engines have started to roar again at Shanghai train stations. A shipbuilder in the city recently delivered a large ethane carrier, the first after it resumed operation.

As COVID-hit Shanghai gradually returns to normal, it now faces a race against time to regain what was lost in the outbreak.

Shanghai’s steady recovery once again proved the resilience of the Chinese economy.

Looking ahead, in its great modernization drive, China is sure to encounter various risks and challenges, some foreseeable and some not. A balance must be found between development and security.

“We should ensure both development and security and always be ready to protect ourselves against potential dangers in times of peace. This is a major principle underlying Party governance,” Xi said.

At the annual “two sessions” in March, Xi listed China’s five strategic advantages, which are the strong leadership of the CPC, the institutional strength of socialism with Chinese characteristics, the solid foundation accumulated in the country’s sustained and rapid development. , the long-term stability of Chinese society, as well as the confidence and determination of the Chinese people to overcome difficulties.

The five advantages explain why China has succeeded and how the country can remain prosperous in the future.

“The world is undergoing profound changes not seen in a century, but time and circumstances are in our favor,” and that is precisely where China’s composure and confidence come from, Xi said. . ■