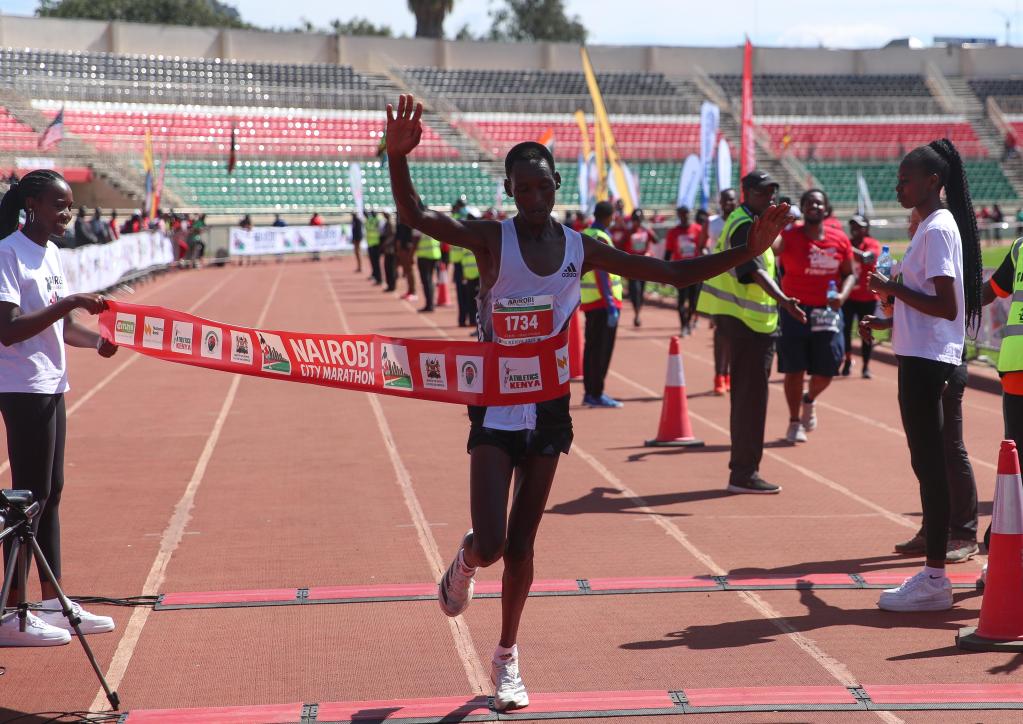 Brimin Misoi, the winner of the men’s 42km race, crosses the finish line during the Nairobi City Marathon in Nairobi, Kenya, May 8, 2022. (Xinhua/Li Zhuoqun)

Around 8,000 amateur and elite runners took part in the first Nairobi City Marathon in four categories on Sunday on the China-built Nairobi Expressway.

NAIROBI, May 9 (Xinhua) — Charles Koskey, a 29-year-old hotelier, was among hordes of athletes whose excitement was palpable after completing the inaugural marathon on the China-built Nairobi highway on Sunday.

The amateur athlete said his participation in the race was motivated by the firm belief that the modern 27.1km thoroughfare heralded a bright future for his homeland amidst seamless mobility, connectivity and improved trade.

“Once the highway opens to motorists, we expect the traffic jam in Nairobi to reduce and position the city as an attractive investment destination,” Koskey told Xinhua in an interview on Sunday. He completed a half-marathon race along the Nairobi highway route, organized by Kenya’s Ministry of Sports ahead of a trial by motorists due to start on May 14. 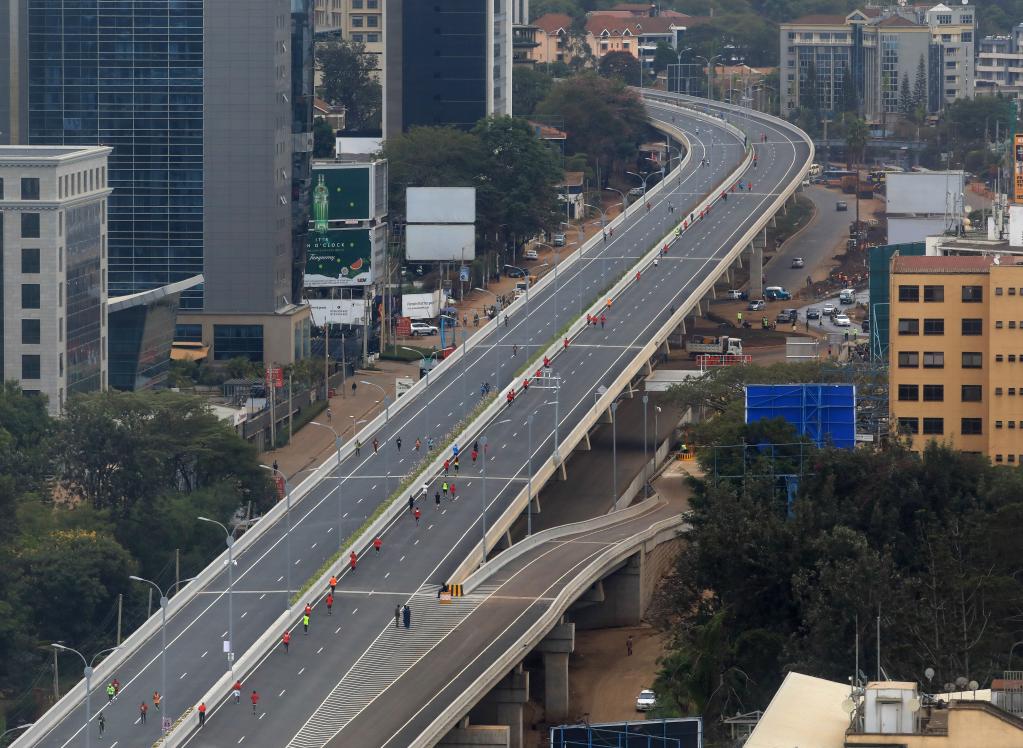 Runners are seen on the Nairobi highway during the Nairobi City Marathon in Nairobi, Kenya, May 8, 2022. (Xinhua/Dong Jianghui)

Around 8,000 amateur and elite runners took part in the inaugural Nairobi City Marathon dubbed Uhuru Classics in four categories, namely a 10km run, a 5km fun run, a 21km half marathon and a full marathon of 42 km.

Koskey said the race has raised the stature of the modern thoroughfare, the operationalization of which will reduce travel time between western parts of Nairobi and the main airport in the south from the current two hours during rush hour to 20 minutes.

“It is good infrastructure for the country. It has created beautiful scenery in Nairobi and our visitors will be happy to enjoy traffic-free journeys to the airport,” Koskey said. 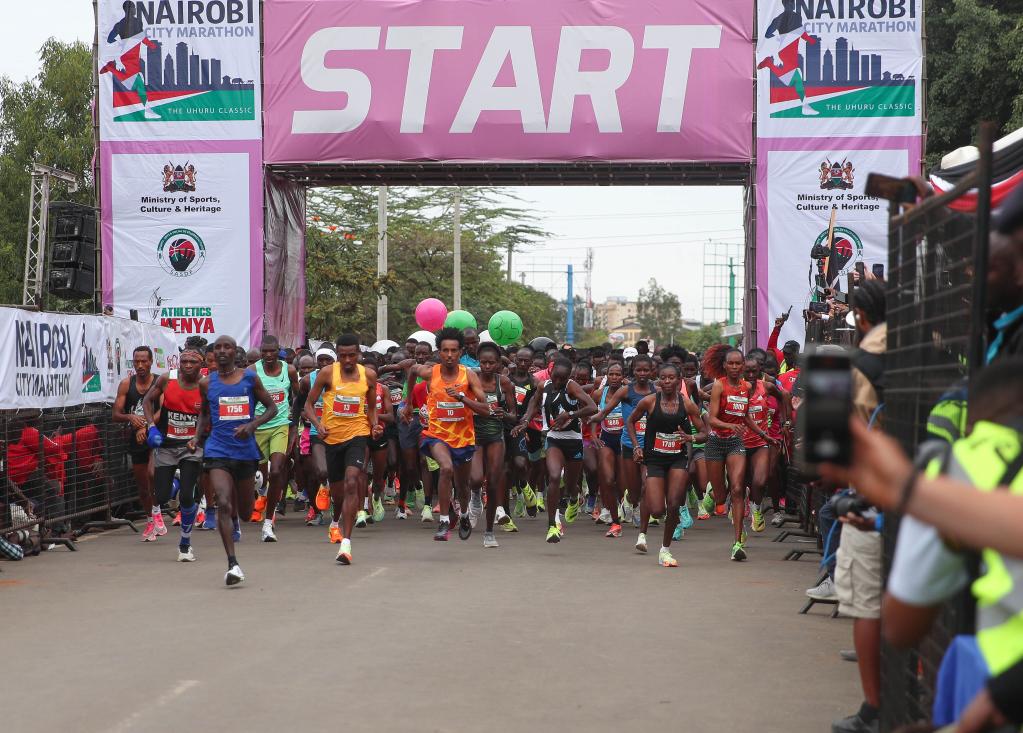 According to Koskey, the highway has already given the city of Nairobi a much-needed facelift besides positioning it as an attractive hub for trade, transport and logistics.

Financed and built by China Road and Bridge Corporation according to a public-private partnership model, the Nairobi Expressway should revolutionize mobility in the Kenyan capital.

President Uhuru Kenyatta told an award ceremony for the marathon winners that the thoroughfare was part of a master plan to upgrade infrastructure in East Africa’s biggest metropolis.

“Through the development of modern infrastructure projects like the Nairobi Expressway, the country will reap multiple benefits including ease of travel, improved trade, investment and environmental health,” Kenyatta said.

He revealed that the highway will be open to motorists on a trial basis from May 14, adding that other expected benefits include job creation, growth in tourism, manufacturing and financial services sectors. .

Runners take part in the Nairobi City Marathon in Nairobi, Kenya, May 8, 2022. (Photo by John Okoyo/Xinhua)

Amina Mohamed, Kenya’s cabinet secretary for sports, heritage and culture, said the Nairobi highway, having been certified as an ideal route to host long-distance races by Athletic Kenya, could boost sports tourism in the country.

“It will be possible to host international sporting events along the route of the highway in the future. This will enhance the country’s stature as a powerhouse of elite racing,” Mohamed remarked.

Brimin Misoi, the 32-year-old men’s marathon winner, said he was delighted to run along the Nairobi highway route, adding that the country needed such a modern infrastructure project to thrive.

Hailing from Elgeyo Marakwet County in northwest Kenya, often described as the homeland of champions, Misoi said the socio-economic benefits flowing from the arterial could spill over to the hinterland.

Stephen Ole Marai, Treasurer of Athletics Kenya South Rift Region, said that since the road connects the airport to densely populated sections of the city, it will improve the ease of doing business, attract foreign tourists and facilitate travel. smooth journey of Kenyan athletes to foreign countries. for big races.

The construction of the Nairobi Expressway has created jobs for skilled local workers and provided sources of income for construction material suppliers. ■