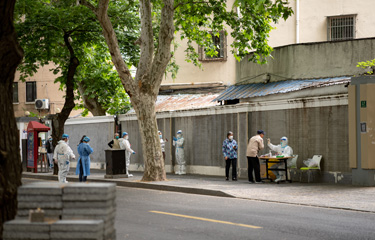 Beijing’s Jingshen seafood market has been closed since May 17, after workers there were sickened by a strain of COVID-19 traced back to imported seafood in nearby Tianjin. The Beijing Municipal Bureau of Commerce and the Municipal Center for Disease Control and Prevention have banned all activity in the market while setting strict testing requirements for truck drivers entering Beijing with food and seafood products. .

Beijing’s seafood producers, processors and traders have already been hit as many parts of the country have been placed under lockdown, including Shanghai, and severe trade restrictions have been instituted to limit the spread of a recent outbreak of the omicron variant of COVID-19. According to the Beijing Municipal Bureau of Statistics, the city’s retail sales fell 16.05% year-on-year in April, well above the national average contraction of 11.1%.

Other Chinese cities look set to enter their own lockdowns as China’s state broadcaster reported a new outbreak in the port city and manufacturing hub of Tianjin, an hour from Beijing, traced back to a worker from a cold store. And in Guangdong, a Chinese man tested positive for a new, more virulent strain of the virus upon arriving in Guangzhou from Nairobi, Kenya, according to the Chinese Center for Disease Control and Prevention. A government-issued lockdown is possible for the key port city and major seafood-producing region, according to local media.

China has helped businesses through tax breaks and deferrals, damaging government coffers, as its revenue from taxes and fees fell 41% year-on-year in April , according to a calculation by Bloomberg.

And the wider economy has been reeling from China’s continued efforts to implement its zero COVID policy. After years of strong growth, China’s e-commerce sector has been going through a difficult period over the past 12 months, mainly due to logistical problems that emerged following the numerous lockdowns in China. On May 16, the U.S. Chamber of Commerce said China’s tight pandemic controls will hamper foreign investment in the country for years to come, as limits on travel impede deals and due diligence. to be carried out, according to Reuters. In its annual report on the business climate for American companies in China, the trade organization said the unpredictability of movements in China would encourage American companies to look elsewhere.

Chinese economists note that the COVID-19 crisis has led to an escalation in US efforts to decouple from the Chinese economy. At a conference in Beijing recently, Li Daokui, a professor of economics at Tsinghua University, said that one of the reasons why the US government invited Southeast Asian leaders to the White House this month was to persuade them to become alternate locations for manufacturing capacity currently based in China. This movement is already underway, as Chinese manufacturers have moved to the region themselves, in part to dodge US tariffs on Chinese products, but also to avoid pandemic controls in China.

China’s Ministry of Commerce noted that for the first four months of 2022, foreign direct investment in China grew 26.1% year-on-year to $74.47 billion (this figure also includes Chinese companies located overseas), with increasing US investment. more than 50%, suggesting that US companies are maintaining confidence in the Chinese market, but it’s unclear how accurate his data is. Investment research database fDi Markets reported a 50% drop in investment in China year-on-year between January and March 2022.

Supported by a weaker renminbi, Chinese exporters are watching closely if and how tariffs are being extended on Chinese imports by US President Joe Biden’s administration. The US government had extended tariffs put in place under former US President Donald Trump’s administration, but Biden is required by law to release a tariff review this summer. Several US government departments have called for lower tariffs to ease pressure on prices while raising them on China’s most heavily subsidized industries. Other U.S. government departments, including the office of the U.S. Trade Representative, want to retain tariffs as leverage to secure broader concessions from China.

During a visit to Brussels, Belgium on May 17 to meet with European Union officials, US Treasury Secretary Janet Yellen called for more coordination between Western economies in their relations with Chinain a bid to push Beijing to come to the table on trade and investment issues, as well as its development and climate policies.