Strengthening ties between China and Cardiff was on the agenda when Ambassador Zheng Zeguang visited the Welsh capital with topics related to education, business and culture.

At Cardiff University, the ambassador met the president and vice-chancellor of the university, Professor Colin Riordan, on Thursday and they discussed ways to strengthen cooperation.

The ambassador was returning to his alma mater after 36 years and he learned about the university’s latest progress in teaching, scientific research and exchanges with Chinese universities in recent years.

These projects have been well received by teachers and students and have played an important role in improving teaching and research on both sides.

Currently, the university has nearly 4,000 Chinese students who have come and are excelling with the facilities available to them, while the hope is to have more in-person exchanges and not just online after the COVID pandemic. -19.

The university is also keen to strengthen cooperation with Chinese industry, so that scientific research can be put into practice. 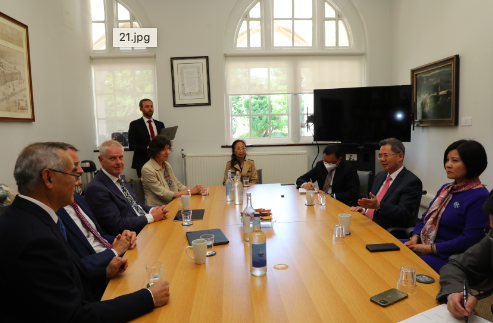 Ways to strengthen cooperation between the university and China were discussed during the visit. /Chinese Embassy

Ways to strengthen cooperation between the university and China were discussed during the visit. /Chinese Embassy

Zheng Zeguang praised the university for the great changes that have taken place over the years. Calling it a premier research university, the Ambassador praised the university’s historical heritage, as well as its open and diverse campus culture, and the tremendous progress made in recent years under Prof. Riordan’s leadership.

For China, he appreciates Cardiff University’s strong commitment to promoting Sino-British educational exchanges and is grateful for the care provided to Chinese students during the epidemic.

The ambassador recalled his experience as a student at Cardiff University College in the 1980s, when China was in the early years of reform and opening up. Since then, China has undergone tremendous changes, the country’s strength and people’s living standards have greatly improved, and socialism with Chinese characteristics has entered a new era.

China is undergoing comprehensive and deeper reforms and opening up to the outside world, while continuing to encourage Chinese universities to deepen their cooperation with Cardiff University.

The ambassador said he hopes Cardiff University will continue to play an exemplary role in education exchanges and cooperation between China and the UK.

During his visit, Zheng also met Councilor Graham Hinchey, Lord Mayor of Cardiff, and they also discussed strengthening friendly relations between China and the city.

Mayor Hinchey warmly welcomed the Ambassador to Cardiff and spoke of the redevelopment that has taken place, boosting the economy while preserving its historical and cultural traditions. Particular progress has been made in the areas of technology, education and culture.

The mayor said Cardiff saw an opportunity for cooperation and development with cities like Xiamen. He stressed that Chinese companies are welcome, and he hopes more Chinese students and tourists will come to study and visit.

Noting Cardiff’s deep historical and cultural heritage, advanced education and remarkable progress in city building and technological innovation, Zheng said Cardiff had always been at the forefront of British cities working in cooperation with China.

At the same time, the Chinese government supports Xiamen and other cities in actively developing friendly cooperation with Cardiff. It is hoped that the two sides will further exploit the potential for cooperation in the fields of economy and trade, investment, scientific and technological innovation, education, culture, tourism and sports, and that the results of this cooperation will bring more tangible benefits to people on both sides. 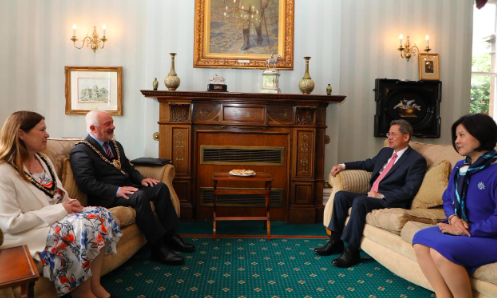 The Mayor and Zheng talked about Cardiff and the redevelopment that has taken place. /Chinese Embassy

The Mayor and Zheng talked about Cardiff and the redevelopment that has taken place. /Chinese Embassy

By coordinating epidemic prevention and control measures with economic and social development efforts, China has effectively safeguarded the lives and health of more than 1.4 billion Chinese people, while ensuring that the economy works within a reasonable range, he said.

Despite the current growing global political and economic instability and uncertainty, China, with its significant strength in political leadership and social system, a solid foundation accumulated over 40 years of rapid development and a long-term stable social environment, and a comprehensive industrial structure and the rapid improvement of innovation capabilities, will maintain economic stability and long-term growth.

China is willing to share development opportunities with other countries in the world, including the UK, and actively develop mutually beneficial cooperation. It is hoped that Cardiff will continue to play an exemplary role in Sino-British sub-national cooperation.