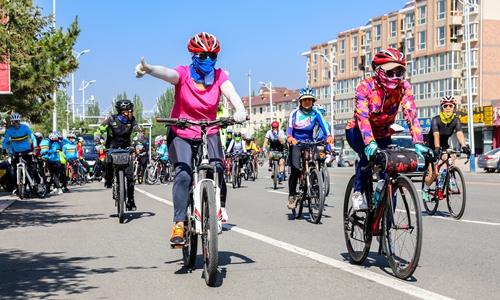 A sudden rejuvenation of the cycling scene in some major cities across China is underway as the COVID-19 outbreak enters its third year.

A Beijing resident in his twenties surnamed Wang said he was looking for bikes priced between 1,000 yuan ($149.4) and 100,000 yuan at bike shops in the city as well as in online stores.

Fancy bikes, along with Frisbee and camping, have become summer “must-haves” for Gen Z in the capital of the world’s second-largest economy in 2022.

Industry insiders say the new trend is deeply linked to the impact of the pandemic, rising income levels and living standards of Chinese people, and their pursuit of healthier lifestyles.

One of the main features of the current wheel craze is that shoppers are eyeing high-end product offerings, primarily sold by a range of overseas brands from the US and Europe, including Specialized, Trek and Brompton. . The island of Taiwan also sports two popular brands – Giant and Merida.

Shi Pengsong, a former sales manager at Specialized, said there’s been a palpable increase in interest in owning a bike in major Chinese cities.

Chinese consumers have shown a preference for high-end bikes, Shi said, because “here it’s as much about bikes as it is about social identity.”

Shi, who now focuses on cycling experiences for children, said the underlying factors are Chinese people’s heightened sense of keeping their bodies healthy and the fact that many leading cities are becoming more bike-friendly. through urban planning.

Awareness of the need to stay in shape has steadily increased among Chinese people between the two Olympic Games held in the country, and the government plans to further increase the number of people who regularly participate in sports activities. to 37.2% of the population by 2025.

As bikes are once again in the spotlight, brands have scrambled to meet the growing demand from China’s vast middle class.

Experts say the buzz around high-end bikes in 2022 is reminding overseas brands of the potential dividends of successfully marketing their products in China.

There is only one problem. They need to be able to produce products to meet demand, something many brands aren’t prepared for in 2022.

Bike shops in major Chinese cities are running out of stock, according to media reports, as the global supply chain for high-end bicycles faces bottlenecks under the impact of the pandemic.

When the Global Times contacted two of Giant’s stores in Beijing, staff confirmed that its best-selling road bikes – the Escape series – were constantly out of stock. Customers have to wait several months.

A marketing department manager surnamed Wang of American high-end bicycle brand Trek told the Global Times over the weekend that the company did not feel a particular increase in demand from mainland customers, but admitted that the China is no different from the rest of the world currently in heightened interest in bicycles in the wake of the pandemic.

Wang said Trek’s supply to the Chinese market was also affected by a global supply chain rumble, which also affected the US, Japanese and South Korean markets.

“Sports bikes have seen double-digit growth since 2015, and the pandemic has boosted their popularity,” Wang said, noting that for Trek, the best-performing cities in terms of sales are first-tier cities such as Shanghai and Beijing and Tier 1.5 cities such as Chengdu in Sichuan Province (southwest China) and Suzhou in Jiangsu Province (east China).

Experts have pointed out that the problem centered on bicycle production seems to be associated with a shortage of gearshift supply, which is highly concentrated among a few suppliers.

Shimano Inc, a leading supplier of shifting systems, said in its first-quarter report that the global cycling boom has shown signs of slowing, with stocks of entry-level and mid-range bikes approaching normal levels, while demand for high-end bicycles remained high.

Zhang Yi, CEO of iiMedia Research Institute, told the Global Times over the weekend that the new fashion is an opportunity for bicycle manufacturers, although much of the opportunity may have been wasted by the bottleneck of supply chain bottleneck that has slowed bicycle production.

Zhang said domestic-brand bicycle makers should improve their design and quality to capture the future market. The quality gap for key components such as shifting systems remains high, and national brands are unlikely to rely on strong online sales.

A June report from Xinhua claimed that Chinese bicycle makers are considering a shift in strategy to expand their reach in mid-range and high-end inventory, citing an executive from the China Bicycle Association.